The research is clear. Below are fifty facts about early literacy that inspire us every day to keep working to make a difference in the lives of children.

Literacy, Language and the Brain 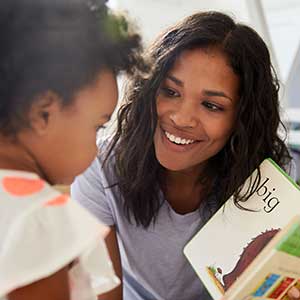 1. The greatest amount of brain growth occurs between birth and age five. In fact, by age 3, roughly 85% of the brain’s core structure is formed. In contrast, the majority of our investments are made in the traditional education years of K-12, which begin at age five. “Lifetime Effects: The High/Scope Perry Preschool Study Through age 40.” Ypsilanti, MI: High/Scope Educational Research Foundation, 2005.

3. The developing brain triples in the first year alone and is virtually fully formed by the time a child enters kindergarten. Eliot, L. (1999). What's Going on in There? : How the Brain and Mind Develop in the First Five Years of Life. Bantam Books.

4. Given the course of brain development, it is not surprising that young children who are exposed to certain early language and literacy experiences usually prove to be good readers later. Just as a child develops language skills long before being able to speak, the child also develops literacy skills long before being able to read. National Research Council. (1998). Preventing Reading Difficulties in Young Children. Washington, D.C.: National Academy Press.

6. Researchers found that when mothers frequently spoke to their infants, their children learned almost 300 more words by age 2 than did their peers whose mothers rarely spoke to them. Huttenlocher et al., 1991. Early vocabulary growth: Relation to language input and gender. Developmental Psychology, 27, 236-248.

7. The most important aspect of parent talk is its amount. Parents who just talk as they go about their daily activities expose their children to 1000-2000 words every hour. Hart and Risley (1999) The social world of children learning to talk.

8. In the first three years, infants and toddlers begin acquiring the first of thousands of words they will use throughout their lives. Simultaneously, children are learning the rules of grammar as well as absorbing the social conventions that exist around communication in their community. Im, J., Osborn, C., Sánchez, S. and Thorp, E. (in press). Cradling Literacy: Building Teachers’ Skills to Nurture Early Language and Literacy Birth to Five. Washington, DC: ZERO TO THREE.

10. Children’s academic successes at ages 9 and 10 can be attributed to the amount of talk they hear from birth through age 3. Hart and Risley, Meaningful Differences in the Everyday Experience of Young American Children.

12. Experts are nearly unanimous in stating that babies should routinely experience shared books as soon as they experience shared talking, that is, during the first weeks and months of life. Butler, D. (1998). Babies need books. Portsmouth, NH: Heinemann.

13. Early literacy encompasses all of a child’s experiences with conversation, stories (oral and written), books, and print. Rebecca Parlakian, Before the ABCs: Promoting School Readiness in Infants and Toddlers. Washington, DC: Zero to Three, 2003.

14. Reading aloud to young children is not only one of the best activities to stimulate language and cognitive skills; it also builds motivation, curiosity, and memory. Bardige, B. Talk to Me, Baby!(2009), Paul H Brookes Pub Co.

15. At its heart, literacy is about communication, which begins long before a baby utters her first word. Babies are prewired to learn, communicate, and connect with others; they tell us what they need through their cries, facial expressions, sounds, and movements. Janice Im, Carol Osborn, Sylvia Sánchez, et al., Cradling Literacy: Building Teachers’ Skills to Nurture Early Language and Literacy from Birth to Five. Washington, DC: Zero to Three, 2007.

16. The single most important activity for building the knowledge required for eventual success in reading is reading aloud to children. National Commission on Reading, p.23. 1985

17. Having books in the home is twice as important as the father’s education level. Research in Social Stratification and Mobility, 2010

18. The only behavior measure that correlates significantly with reading scores is the number of books in the home. The Literacy Crisis: False Claims, Real Solutions, 1998

20. The most successful way to improve the reading achievement of low-income children is to increase their access to print. Newman, Sanford, et all. “American’s Child Care Crisis: A Crime Prevention Tragedy”; Fight Crime: Invest in Kids, 2000.

21. Creating a steady stream of new, age-appropriate books has been shown to nearly triple interest in reading within months. Harris, Louis. An Assessment of the Impact of First Book’s Northeast Program. January 2003.

23. Children who are read to at least three times a week by a family member are almost twice as likely to score in the top 25% in reading compared to children who are read to less than 3 times a week. Denton, Kristen and Gerry West, Children’s Reading and Mathematics Achievement in Kindergarten and First Grade (PDF file), U.S. Department of Education, NCES, Washington, DC, 2002.

24. Children who live in print-rich environments and who are read to during the first years of life are much more likely to learn to read on schedule. Southern Early Childhood Association, “Making Books Part of a Healthy Childhood.”

26. Children who are “well-read-to” (at least five times a week), when asked to tell a story, used more literary language than unread to children, and they used more sophisticated syntactic forms, longer phrases, and relative clauses. They were also better able to understand the oral and written language of others – an important foundation for the comprehension skills that will develop in the coming years. Wolf, M. (2007). Proust and the Squid: The Story and Science of the Reading Brain. New York: Harper Perennial.

29. The nurturing and one-on-one attention from parents during reading aloud encourages children to form a positive association with books and reading later in life. Reach Out and Read, Archives of Disease in Childhood, Reading Aloud to Children: The Evidence, 2008.

31. Parents who read to their child while asking minimal questions during reading, and pausing infrequently, had children who did not talk very much. On the other hand, parents who paused frequently during the story had children who asked more questions, talked more, and engaged in conversation. Home-School Study, DeTemple (2001)

34. 80% of preschool and after-school programs serving low-income populations have no age-appropriate books for their children. Neuman, Susan B., et al. Access for All: Closing the Book Gap for Children in Early Education. Newark, DE: International Reading Association, 2001, p. 3.

35. Children from lower-income homes have limited access to books. Because of this, preschoolers from low-income families have fewer home and preschool language and literacy opportunities than children from economically advantaged backgrounds – a major reason that they lag behind in reading achievement throughout the school years. Berk, L. E. (2009) Child Development (8th ed.). Pearson Education, Inc

36. Across the nation just under half of children between birth and five years (47.8%) are read to every day by their parents or other family members . Russ S, Perez V, Garro N, Klass P, Kuo AA, Gershun M, Halfon N, Zuckerman B. Reading Across the Nation: A Chartbook (2007): Reach Out and Read National Center, Boston, MA .

40. Half of children from low-income communities start first grade up to two years behind their peers. Brizius, J. A., & Foster S. A. (1993). Generation to Generation: Realizing the Promise of Family Literacy. High/Scope Press.

41. Researchers estimate that before ever entering kindergarten, cognitive scores for children of low-income families are likely to average 60 percent lower than those in the highest socioeconomic groups, something that remains true through high school. Lee, V. E. & Burkam, D. T. (2002). Inequality at the starting gate: Social background differences in achievement as children begin school. Washington, D.C.: Economic Policy Institute.

42. 1 in 4 children in America grow up without learning how to read. WriteExpress Corporation. "Literacy Statistics." Begin to Read. Accessed April 16, 2014.

43. The sad truth is that the vast majority of children who start behind, stay behind, leading to an increase in our nation’s dropouts rate among low-income and minority students. America’s Early Childhood. Jumpstart, 2009

46. 68% of fourth-graders in Georgia are not reading proficiently. Georgia Center for Nonprofits 2013

47. In fact, low achievement as early as fourth grade is a powerful predictor of high school and college graduation rates, as well as lifetime earnings. McKinsey & Company (April 2009). The Economic Impact of the Achievement Gap in America’s schools. Washington, D.C.

50. Surveys of adolescents and young adults with criminal records show that about half have reading difficulties. Similarly, about half of youths with a history of substance abuse have reading problems. National Information Center for Children and Youth with Disabilities. (1998). Children with reading disability. Washington, D.C.: Robert Bock. 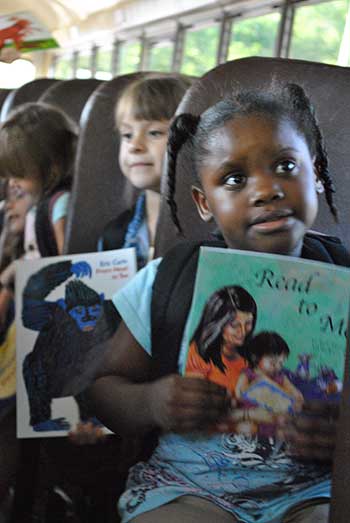 Thank you for visiting Ferst Readers!

Ensuring that children develop early literacy skills is one of the most important things we can do - as parents, as teachers - and as a society.

Won't you help us make a difference?